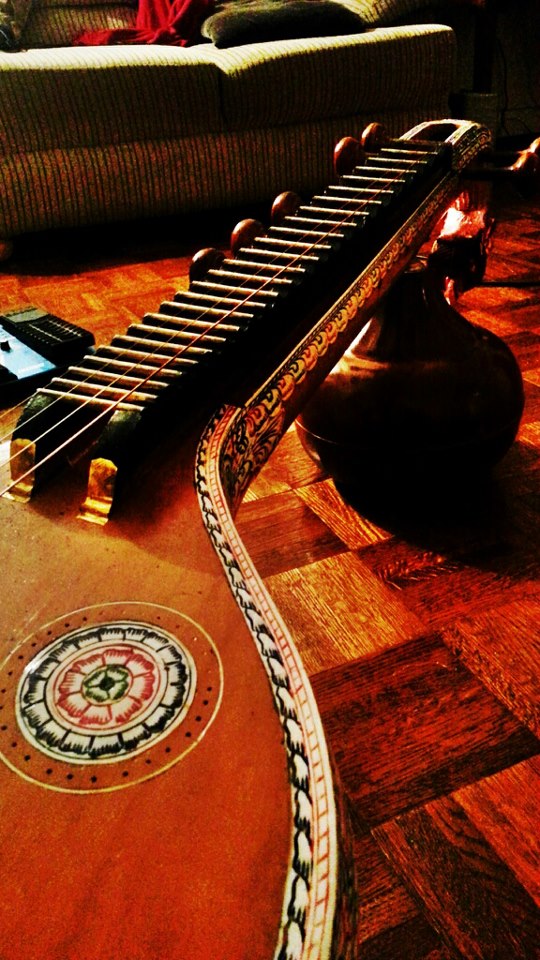 It is fifty-four inches in length and is the source of sounds so riveting that even the perpetually bored and the irrepressibly stoic are pleasantly surprised. That surprise often yields to wonder and sometimes, curiosity. Time and time again, people who are anything but naïve find themselves feeling a surge of molten novelty when their ears and eyes are greeted by its exotic sounds and hallucinatory appearance. What is it?

Some conjecture that it is tantamount to what God’s tobacco pipe would look like. Traditionalists insist that only the truly blessed are worthy to wield it, categorizing it at the level of Arjuna’s Gandiva or Muruga’s Vel. Ironically, some have even thought this peaceful and loving creature to be a weapon. Many, too many, confuse it with its famous descendant the sitar (as a result of this descendant’s fortuitous encounter with the Beatles), a fact that testifies to its vigor and timeless youthfulness. More imaginative witnesses swear that they’ve seen juice dripping from the fangs of its serpentine mouth.

Some of the more scientifically inclined in the Tamil community have ventured that if one were to extract the vocal cords from the larynx of a dinosaur, and stretch them taut like telephones cables between two temple mandapams, and also arrange for the late M.S. Subhalakshmi to sing at this location, one would basically have re-created its essential message. Regardless of such anecdotal reports, what may be said with some certainty is that it does indeed have structural and functional elements that are purely practical and nothing more. Yet it also boasts of elements that convey superfluous abundance, a lush ‘brimming-at-the-lid’ aesthetic that one can only guess was the secret pleasure (or secret death?) of its passionate creator, an artist in the league of Gaudi or Picasso.

What is it? Well, let me be scientific. It is the amputated torso of Artocarpus heterophyllus, or palapazham in Tamil. Palapazham is commonly known as the jack tree. This tree is a common sight (famous for its gigantic fruits) throughout south India. Now, let me share with you something fascinating about these fruits. The jackfruit is unusual because it grows upon the trunk of the jack tree, and not merely on the terminal portions of the branches, among the leaves. To a botanist, this may be merely interesting trivia. But to me, this is a fact worthy of thorough investigation.

Indeed, some entrepreneurial individual in ancient India, at a time that predates writing, must have thought that there may be some peculiar power or juice in the torso, sorry- trunk- of the jack tree, a power that allows the fruit to sprout directly from the trunk. Like any businessman, this fellow must have decided to pursue the matter via direct inquiry: cut the tree down, use its leaves for medicinal purposes and its delicious fruit for food and ritualistic purposes, while the artist-carpenter would be assigned to investigate the trunk. The latter in all likelihood would perspicaciously remove the bark, revealing the fresh pulpy wood gleaming reddish like Shiva’s eyes.

(Translated from the Sanskrit)

“Yep, there’s some mighty juice in this here wood,” says the artist (madman).

“Get to the root of the matter! There’s money to be made from it!” says the entrepreneur.

“Ok. Come back in 8 Brahma days time, and you’ll have a new invention that will make all people come to you with smiling faces.”

Imagining that this implied power, wealth, and other practical things, the businessmen hurries off, leaving the sculptor at peace with a large trunk of freshly skinned jackwood.

The wood, though having very good tensile strength, is not dense enough to withstand excessive weight, so sculpting it into furniture would be out of the question. Our creator being a pacifist, weapon making would also be an equally undesirable option. Reflecting deeply on these and other possibilities, he becomes drowsy and gradually falls asleep, perhaps after sipping too much palapazham juice. Hours pass, and the trunk dries in the midday heat. As twilight approaches, the jungle begins to awaken. A king cobra slithering nearby decides to make its mark and grab a meal. It moves towards our sleeping genius, biting him roughly on his left thigh. The artist awakens with a scream and a bloody thigh; the cobra moves deftly away, flesh still sticking to its venomous fangs. Dumbfounded though he is, our artist understands that this is a serious matter. But the venom was rushing through his body and the effect of it, combined with the noisy flutter of a flock of swans meandering nearby, confuses him greatly.

Perceiving the approach of death, he turns resolutely towards the artistic task at hand (like any true genius, his artistic calling was more powerful than any motivation to call for help or to clamor for survival), and he begins chipping away with a chisel at the wood. As he does so he experiences visions of snakes, swans, swan-headed snakes, and a swan with a snake in the place of its long neck and head. All of these images fuel his creative fire even more.

At one end he creates a gourd, which is a round hollow chamber. The long axis of the wood he trims and thins to three inches in width and height. Not having the strength to get more materials, he takes a block of wax and melts it on top of and along this trimmed middle part. Seven inches from the opposite end, he creates another gourd, this one smaller. At the very end, with his mind overwhelmed by hallucinations of a snake demon, he carves a dragon’s head.

He etches images of swans and peacocks on the surface of the large gourd, sets small pieces of brass into the solidifying wax, and attaches brass hooks to each end of the long axis, leaving him with the final problem: he requires wires to stretch the length between the two hooks. He looks up from his labor and dizzyingly glimpses the swans nearby, in the haze of the setting sun. In a mad rush of life that is characteristic of the truly inspired, (or perhaps of those facing their mortal end), he charges after the swans, grabs one by the neck, tears it apart before it can react, and extracts a long sinuous tendon, still pulsating with electricity, that appears to have the appropriate tensile strength and pliability. He hurries back to his work and stretches the tendon taut between the two hooks. Looking at his creation with wide eyes, he inhales and exhales once deeply, and promptly slumps to the ground in a blissful death.

When the patron comes back in eight days, he finds a veena, the gorgeous and mellifluous Indian lute that is probably the oldest extant string instrument on the planet. When playing the veena, the smaller gourd built on one-end rests on the left thigh, as the dragonhead overlooks the scene like some ancestral spirit. The larger gourd is the vault in which sound originating from plucked strings resonates and gathers like bubbling ethers in a witch’s cauldron, before emanating out in lush, majestic glory. The strings, now made of steel, (to avoid swans being placed on the endangered species list), are pliable, and quiver with the slightest fingertip touch, just as the human voice quivers in florid vibrato. While the piano merely sports twelve tones per octave, the veena creates tones, overtones, and overtones between overtones- as many as twenty-four notes per octave.

With a smooth varnish coat, the veena radiates a woody mystique, and remains true to its organic origins. Since the fret board is composed of brass frets set in wax, it is heat sensitive; the timbre of the instrument is different depending on ambient humidity and temperature. Such an instrument that responds to its environment and makes its own choices is moody, dangerous, unpredictable, and beautiful like a goddess. When an artist makes peace with his goddess, beautiful vibrations come forth. The veena is alive.

Ever open to change and to unknown frontiers, the veena was ready to respond when it approached its limits, since, like any living creature, it has its limits. When medieval kings wanted the veena to resonate through the large Rajput corridors, they had their people create the sitar, which is the famous descendant alluded to above. The sitar has powerful resonance, is lighter and louder, portable and practical, although it sings with less delicacy in comparison to its mother the veena.

It is the essential personality, style, and abundant soulfulness of the veena that connects me to the motherland, to the Indian community worldwide, to Indian culture, and even to my place in history. The Goddess of Knowledge, Saraswati, whose ride is a swan, holds the veena and composes the melody of truth from it. This is important to me, as it is a reminder that if I deign to pick up the veena, I must pursue a noble path, choose the Higher Self, and make music that is a direct link to and from the Soul.

I had vaguely known about veena as a child. A veena teacher in my childhood introduced me to the act of playing music. However, it was when I witnessed the late Chittibabu perform his veena magic live, that I felt the call: I had been bitten by the dragon of wisdom that graces the veena.

I began to study classical music and I reacquainted myself with my Tamil villager roots. I roamed through the Tamil countryside, wanting to grasp the essential heritage of my rishi ancestors. The veena introduced me to the Indian community at large. Like a wife who encourages her husband to be courteous in public, the veena connects me to the Indian community and helps me understand its often oblique or brusque elements, its traditions that refuse to go away, and its forms of expression. Regarding my place in history, both my relationship to veena and my music place me in the general context of a vastly enlightened heritage: a country of sages, warriors, and multi-faceted women.